...the complete Nigerian football portal
Subscribe
Nigeria-Eligible Fullback Udogie Fires Italy Into The Final Of U17 EURO
Published: May 17, 2019 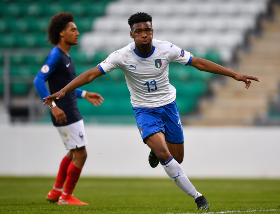 Hellas Verona fullback Iyenoma Destiny Udogie scored the most important goal of his career to date after his 81st minute game-winner saw Italy beat France 2-1 at the Tallaght Stadium in Dublin on Thursday and qualify for the 2019 European U17 Championship showpiece.
It was the first goal scored by the left-back for the Italian national teams after thirteen appearances in total for the U16s and U17s.
France were hot favourites going into the semifinal and took the lead through Enzo Millot in the 41st minute, but Italy were level on the stroke of half-time as Esposito fired his free-kick over the wall and inside the near post.
Nine minutes from time, Udogie hammered into the roof of the net to make it 2-1 following a classic counterattack.
The 16-year-old is set to become the second player of Nigerian descent to feature for Italy in two consecutive U17 EURO finals, following in the footsteps of Juventus defender Paulo Iweru.
Republic of Ireland duo Andrew Omobamidele and Oluwatimilehin Sobowale, and Germany's Karim Adeyemi scored for their respective nations at the U17 EURO.
Udogie and his Italian teammates face the Netherlands on Sunday, in what is a repeat of last year's final.
Ifeanyi Emmanuel
Photo Credit : uefa.com