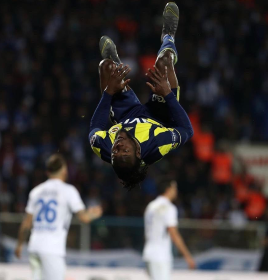 Victor Moses was delighted to net the game winner for Fenerbahce as they registered a 1-0 win against BB Erzurumspor on Monday evening but admitted that the opponents proved a tough nut to crack.
BB Erzurumspor, who pay the wages of Emem Eduok, are involved in a relegation dogfight and were holding their illustrious opponents to a goalless draw until the 59th minute when Moses converted a spot kick.
''It is a massive three points for us today, we know that it was going to be a difficult game for us today, we know the position that the team we are playing against are in at the moment,'' Moses told Fenerbahce TV after the game.
''They wanted to fight right from the start to the end but we showed a great character.
''We kept our foot firmly on the floor and the most important thing for us today was to get the three points. We did that today so we are very pleased.''
With one game left before the end of the season, Fenerbahce are eighth on the 18-team table with 43 points accumulated from 33 games.
Ifeanyi Emmanuel
Photo Credit : fenerbahce.org