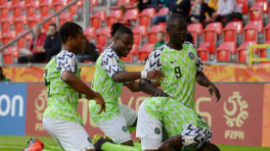 Nigeria began their campaign at the 2019 FIFA U20 World Cup in Poland with a 4-0 thumping of Qatar in their Group D clash at Stadion miejski on Friday evening.
Goals from Maxwell Effiom, Henry Offia, Dele-Bashiru and Aliu Salawudeen secured a comprehensive win for Paul Aigbogun's side.
Allnigeriasoccer.com runs the rule on the Flying Eagles players :
The Starters
Goalkeeper

Orewale Oremade: Had very little of note to work on aside occasional half chances which the Asians fell to capitalize on. (7/10)

Aliu Salawudeen: Kept his composure in defence and showed his offensive instincts when he fired home off Adam's header following a corner. Splendid display. (7.5/10)

Valentine Ozornwafor: Ably nullified the threat of the opposition in central defence and looked imposing. (7/10)

Ikouwem Utin: Led by example. South every slightest opportunity to push upwards and it was his effort that led to the opener.

Did his defensive job to fulfillment while also setting up Offia for the second goal. (8.5/10)

Tom Dele-Bashiru: Pulled the strings from deep and looked unplayable against his midfield opponents. Capped off an impressive individual showing in midfield with the third goal. (8.5/10)

Maxwell Effiom: Gave his team the lead when he showed quick reflexes to latch onto a rebound to put past Mamdouh.

Looked threatening when going up against the opposition. (8/10)

Kingsley Michael: Another of the star performers in the rout. Made a number of silky moves through the flanks, constantly keeping the opponents on their toes.

Muhammad Tijani: Made a couple of runs in behind and even saw one of his goal-bound effort cleared by Mamdouh Baah. Came off for Adams in the second period. (6/10)

Henry Offia: Led the lines admirably and is looking a good source of goals for this team. Put away his side's second after been teed up by Utin.

Was up to the task and was often seen bombing upfront and putting in dangerous crosses. (8/10)

Showed off his attacking prowess within his short time on the pitch. (6/10)

Success Makanjuola: Came on for Effiom in the closing stages and had little time to showcase himself. NA

Nnamdi Ofoborh: On for Dele-Bashiru as the manager sought to add fresh legs. NA