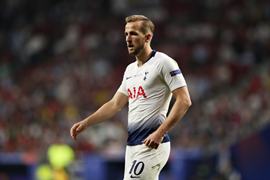 Social media is buzzing at the moment, and here is a quick run down of what Nigerians are saying on Twitter concerning the game :

@TheFrankIsola: "Liverpool gets LeBron another title."

@PulseNigeria247:  "Origi with the 2nd goal for Liverpool and it's all but over for Tottenham."

@cherylroberts00: "Look at this! Africans have scored in the finals of this year's women's and men's European club championship. It was Nigeria 's Asisat Oshoala that recently scored for Barcelona and tonight Egypt's Mo Salah, surely inspired by Asisat, has scored for Liverpool. Look at Africans!"

@PoojaMedia: "FT: #TOT 0-2 #LIV THE TRUTHS; - Pochettino's messed himself off - Salah & Mane disappeared - Alli was a road side passerby - Matip is underrated - Van Dijk is a Royce Rolls - Kane thought he was on the beach -Origi is the key holder Klopp BREAKS the final failure tag."

@debolaadebanjo: "If Egypt was Nigeria with Egyptians football craze, there'd be a public holiday on Monday for this Salah goal and Liverpool win."

@OlanariDonald:  "Can't wait for @LFC to win the Champions league and Nigerian pastors will use this Analogy in church tomorrow. You will break free like Liverpool and receive your champions league. Somebody say amen"

@DemiSoneye: "Dele Alli is just another version of Linger tbh. So overrated."

@biolakazeem: "Dele Alli is excellent at what exactly?"

@Protocore37: "Poch did everything and got everything right till the Finals... he should have never started Harry Kane , he is their problem they play so well without him and look unpredictable without him... #UCLfinal"

@chiddyafc: "Kane , Alli, Eriksen, Son all dropped 0 /10 performances in the biggest games in their careers"