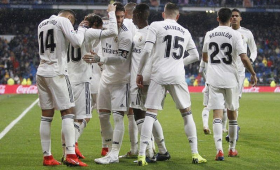 Today, it is much easier to discover the livescore today for yourself, because for this you will only need to go to a certain reliable resource, which usually presents a wide coverage of events and the fastest possible updates of data.

The upcoming season will be very important for Real Madrid. The last championship was frankly a failure for them.

As a result, already in the beginning of March the Meringues didn’t fight for any of the trophies.

The return of Zinedine Zidane to the position of the head coach also made little difference.

The thing is that the team no longer has the motivation to do its best at 100% in each match.

All today livescores of matches featuring the Royal club were pretty mediocre. The new season will bring fundamentally different expectations.

Once again Zidane’s team is expected to compete not only in Spain, but also in the international arena, where Real’s main task is to regain the Champions Cup.

In order to achieve goal this, the Royal club is being active in the transfer market for the first time in a long time. The club has already signed Jovic, and this is the first signal that the team will try to get back to its previous level.

However, the Meringues are still very far away from the level of Barcelona, even despite all its problems. Only time will tell if they can compete against the Catalans in the long run.

Most ikely, Zidane came for a long time, so he will build the team gradually. The problem is that fans will demand successful results starting from the very first match. The first term of Zidane at the coach’s position was rich in victories, especially in the international arena.

Now, the bar of requirements is not lower, but will the Frenchman be able to justify the trust starting already from the first matches of the new season?

So far, the Real Madrid fixtures look uncomplicated. It is clear that the main fight for the titles will begin no earlier than in winter.

For the Meringues it is extremely important not to lose many points in matches against middle class clubs and outsiders during this period; such a situation has become a real disaster for them in the past few seasons.

It has repeatedly happened that by the new year it was obvious that Real could not compete for gold medals.

While Zidane was able to skillfully refocus the team on the European cups, then his descendants couldn’t do it.

You can always follow the fixtures of Real Madrid and other information on the team on the website of sports statistics.

Here the following data are available:

schedule of events;
individual statistics of athletes
history of personal confrontations against rivals.

Thanks to a whole set of advantages of the site, there will be no secrets left regarding the life of the team in the important season, which is gradually gaining momentum.