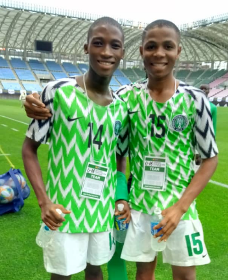 Nigeria U16s, otherwise known as the Future Eagles, recorded an impressive 3-1 win over Mexico in their opening game of the International Dream Cup 2019 on Wednesday morning.
The Haruna Ilerika-led side dominated the first half but had to wait until the 45th minute before breaking the deadlock.
Future Eagles number seven Egesionu Sopuruchukwu literally walked the ball into the net, profiting from a rebound after the Mexico goalkeeper had saved his initial effort

Sopuruchukwu was the architect of the second goal, seven minutes into the second half, when he was brought down in the area and the referee pointed to the spot.

He was still receiving treatment on the sidelines when captain Adeleke Oluwatobi sent the goalkeeper the wrong way to make it 2-0.

In the 72nd minute, Adeyeye Damilola increased the lead with a close range effort, before Mexico number ten scored the pick of the goals with a stunning free-kick.

In their next fixture, Nigeria will face host Japan on June 14 before their last game against Romania two days later.
Ifeanyi Emmanuel
Photo Credit : thenff.com