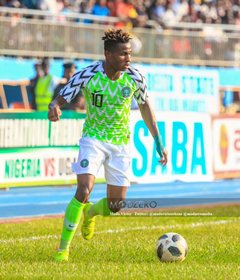 Villarreal winger Samuel Chukwueze has been named among the top fifty U20 players in the world for the 2018-2019 season by celebrated French sports daily L'Equipe.
The Nigeria international has been ranked 25th out of the 50 talented players considered.
He ranked higher than Chelsea's Mason Mount (30th), Benfica's Gedson Fernandes (31st), Manchester United's Diogo Dalot (34th) and Real Madrid's Brahim Diaz (38th).
Arsenal winger Reiss Nelson, who spent last season on loan at 1899 Hoffenheim, is 21st on the list of players.
National Team coach Gernot Rohr was contacted to discuss the key attributes of the winger whom he handed a debut to in November 2018 against Uganda.
''He can become a very good player. He has a very good left foot, he is fast, he has a low center of gravity that gives him balance, he can score and pass,'' said Rohr to the newspaper.
Last season, Chukwueze participated in 38 games across all competitions for Villarreal, scoring 8 goals and providing three assists.
The Diamond Academy product has a release clause of 63 million euros and has been linked with a move to the Premier League.
Ifeanyi Emmanuel