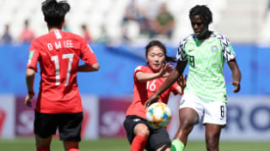 Nigeria recorded a morale-boosting 2-0 victory versus South Korea in their Second World Cup group game at the Stade Des Alpes on Wednesday afternoon.

Thomas Dennerby made three changes to the side that lost to Norway last time out, Chiamaka Nnadozie replacing Tochukwu Oluehi in between the sticks while Chinaza Uchendu and Chidimma Okeke also started.

Nigeria made a quick start to proceedings in Grenoble after just nine minutes, with Francisca Ordega's in swinging cross picking out Desire Oparanozie but her header was only as far as South Korea goalkeeper Kim Minjung who smothered her effort away from goal.

Lee Geummin would threaten next for South Korea after turning out a defender but curled her shot straight at Nnadozie who did well to hold onto the ball.

However, Nigeria went ahead in the 29th minute when Kim Do-yeon inadvertently turned home a long ball from Rita Chikwelu past her goalie.

Nigeria continued to control the game after the break and looked much more physically prepared than their opponents.


And it was Barcelona forward Asisat Oshoala that handed the Super Falcons the deserved cushion in the 75th minute when she shrugged off the resistance of Hwang to round Minjung and slot home to the delight of the supporters.
According to OPTA, Chiamaka Nnadozie has become the youngest ever goalkeeper to keep a clean sheet in a Women’s World Cup game aged 18 years and 186 days following her clean sheet against the South Koreans.
Nigeria will seal progression to the knockout stages of the tournament for the first time in their last five attempts if they can get a favourable result in their next group game against France.
Emmanuel Chinaza
Photo Credit : fifa.com