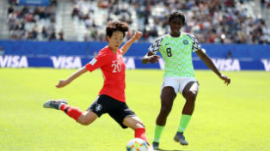 The Super Falcons of Nigeria brought their 2019 World Cup campaign back on track as they thrashed South Korea 2-0 on Wednesday afternoon.

An own-goal from Kim Do-yeon and Asisat Oshoala's beautiful goal were all the Falcons needed to get maximum three points against the Asian country.

Nigerians are happy with Oshoala's woman-of-the-match display, and here are some of what they're saying about the Barcelona star on Social Media:

@Jololade: "Oshoala brought all her armoury to that goal, pace, power and hunger. #FIFAWWC #NGAKOR"

@birdiefootball:  "Asisat Oshoala is the Woman of the match. congratulations #NGAKOR"

@sirpaul42 : "#NGRKOR oshoala is so good that Koreans are clapping for her...... Proudly Nigerian she is just making My head swell"

@official_maxwin: "Man Utd need to sign this Oshoala as their top striker and sell Lukaku on a free transfer deal #NGAKOR "

@Demosha_:  "I dey fear to tweet my mind about Oshoala"

@GuchoKingsley: "This is so incredible @ Oshoala is on fire "

@ChidubemNJ: "Asisat Oshoala with the goal, Chidinma Okeke with the sauce. Common you Falcons!"

@theCyberNewt: "You can tell how much that goal meant to Asisat Oshoala. #NGA #NGAKOR #FIFAWWC"

@AyodejiX2: "Decent finish by Oshoala. That playmaking from Okeke is quite brilliant. #FIFAWWC"