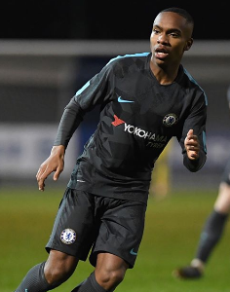 Allnigeriasoccer.com understands that EFL League Two club Colchester United are interested in signing London-born Nigerian wonderkid Tushaun Tyreece-Walters this summer.
The U's have invited the 19-year-old for a pre-season trial with the club which begins in the first week of July.
Tyreece-Walters is expected to train with Colchester United for at least one week and will be offered a contract if he impresses the coaching staff.
Having netted an impressive 19 goals for FC Greenwich Borough last season, he has not gone unnoticed by several clubs higher up the football pyramid in England but Colchester United have made the most concrete move.
The left footed winger joined FC Greenwich Borough following his release by Chelsea at the end of the 2017-2018 season.
Tyreece-Walters is a pacy winger with good dribbling skills and also a good finisher.
He played for the youth teams of Tottenham Hotspur and Abbey Rangers prior to his move to Chelsea in the summer of 2017.
Ifeanyi Emmanuel
Photo Credit : chelseafc.com