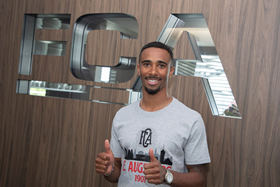 German Bundesliga side FC Augsburg have announced the signing of former Super Eagles invitee Noah Sarenren Bazee following a successful medical.
The exciting winger, who last played for Hannover 96, has put pen to paper on a five-year contract with his new employer, until June 30, 2024.
Bazee, 22, recorded 15 appearances in the German top flight during his six-year stint at Hannover 96.
Reacting to his move to FC Augsburg, Bazee told the club's official website : ''I want to take the next step in my development in Augsburg and I’m happy that the FCA board have put their trust in me.

''I’m looking forward to playing my first games in an Augsburg shirt.''
Born in Stadthagen to a German mother and a Nigerian father, Bazee trained with the Super Eagles in March 2017 but could not make his debut in a friendly against Senegal because he was struggling with a knee injury.
He has been allocated the number 17 jersey for the 2019-2020 campaign.
Ifeanyi Emmanuel
Photo Credit : fcaugsburg.de