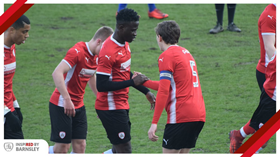 English Premier League and Football League clubs are facing a stumbling block in their pursuit of Nigerian wonderkid Araphat Abubakar, allnigeriasoccer.com understands.
The attacking midfielder, who turns 18 on July 1, trialed at Barnsley and was offered a professional contract but couldn't sign it due to Football Association's work permit rules.
Abubakar was in England on a student visa and completed his studies last Friday.
He was at Barnsley for a few months, started with their U16 team, before moving to the U18s then the U23s because of his high ability.
The number ten has been scouted by West Ham, trained with Wigan Athletic and Burnley are also interested in his signature but face an obstacle due to the immigration rules.
Abubakar, who previously played for Westerlo and MFM, won a scholarship to Brooke House College United Kingdom in October 2017.
Ifeanyi Emmanuel
Photo Credit : barnsleyfc.co.uk