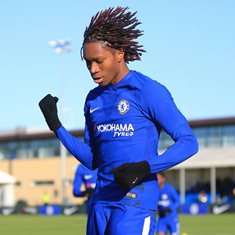 Allnigeriasoccer.com has been informed that French Ligue 1 side Lyon have been offered the chance to sign England youth international of Nigerian descent, Tariq Uwakwe this summer.
Three weeks ago, before the Premier League published the retained lists, the versatile midfielder had hinted that he wanted to move onto pastures new, preferably a foreign club.
It is understood that Lyon have studied Uwakwe's curriculum vitae but are unlikely to sign him as they have assumed that he would not be ready for first team football straightaway.
The 19-year-old has been offered a contract extension to remain at Stamford Bridge beyond June 30, 2019.
He is considered one of the promising players at Chelsea and was invited to train with the first team ahead of the Premier League meeting with Tottenham Hotspur in February.
Last season, the London-born Uwakwe represented Chelsea in the UEFA Youth League, Premier League 2 and EFL Trophy.
Ifeanyi Emmanuel
Photo Credit : chelseafc.com