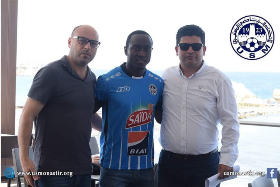 Through a press release, Tunisian Ligue 1 side US Monastir have announced the signing of former Nigeria U20 international Moses Orkuma.
The defensive midfielder was a player of Stade Gabèsien last season and has informed allnigeriasoccer.com that he has penned a two-year deal with US Monastir.
Since Orkuma departed the shores of the country in 2013, he has represented only North African clubs, first turning out for Al Ahli Benghazi before spells at étoile Sportive du Sahel and Al-Ahly Tripoli.
''When signing the contract, we set the first goal for the next season to get ranked among the top four. And of course we won't forget the cup competition,'' Orkuma said.
''In addition to this, I came to US Monastir to highlight myself in the tournament. In the end, I would like to thank the fans of the club who supported me through messages even before and after the signing of the contract.''
A product of Lobi Stars, Orkuma played two games for the Flying Eagles at the 2013 FIFA U20 World Cup in Turkey.
Igho Kingsley
Photo Credit : usmonastir.org