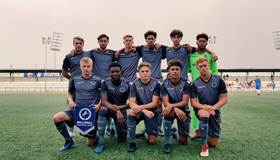 Manchester City have pulled off a transfer coup by beating three former European champions to the signing of Nigerian wonderkid, Samuel Edozie, according to The Sun.
Allnigeriasoccer.com understands that Edozie has been signed for an initial fee of £1million, but it could rise to £2million if he ever makes his debut for Manchester City.
The 16-year-old Edozie had attracted interest from Chelsea, Bundesliga giants Bayern Munich and Borussia Dortmund as well as RB Leipzig before agreeing terms with The Citizens.
Chelsea were unsuccessful in their attempt to convince him to join The Blues after he was introduced to England star Ruben Loftus-Cheek at Cobham.
Ruben Loftus-Cheek is the first academy graduate to succeed at Chelsea since former captain John Terry.
The Nigerian whizkid is expected to play for Manchester City U18s in the new season.
Ifeanyi Emmanuel
Photo Credit :  millwallfc.co.uk