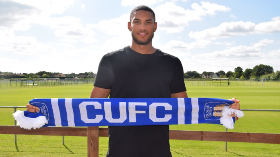 EFL League Two club Colchester United have confirmed the signing of Omar Sowunmi who played for Yeovil Town last season.
The 6'6 defender has penned a two-year deal with Colchester United, ending his four-year stint at Yeovil Town in the process.
Born in Colchester, Essex, Sowunmi began his career at Ipswich Town Academy and enjoyed loan spells at Braintree Town and Lowestoft Town whilst at Portman Road.
The 23-year-old has recorded 70 appearances in the Football League, scoring three goals and setting up six others.
Predominantly a center back, Sowunmi can be deployed as a striker in emergency situations.
He has a Nigerian father and English mom and is eligible to represent the Super Eagles and Three Lions at international level.
Igho Kingsley
Photo Credit : .cu-fc.com