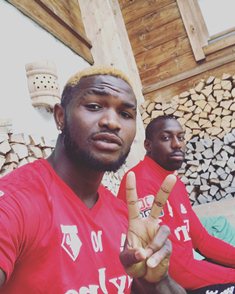 According to celebrated Italian sports newspaper, La Gazzetta dello Sport, Turkish champions Galatasaray are interested in signing Nigeria-eligible striker Stefano Okaka.
The former Italy youth-teamer has resumed pre-season training at Watford but could be set for another move after spending the second half of last season on loan at Italian club Udinese.
He was behind Troy Deeney, Andre Gray, Gerard Deulofeu and even Isaac Success in manager Javi Gracia's pecking order of strikers last term and with these players still at Vicarage Road, he might find first-team opportunities limited if he remains at the club.
Okaka impressed while on loan at Udinese, scoring 6 goals in 16 appearances including 11 starts.
Since transferring to Watford  at the beginning of the 2016-17 season, the 29-year-old has made 13 Premier League starts and was a substitute in 23 matches.
Okaka lists AS Roma, Spezia, Fulham, Modena, Brescia, RSC Anderlecht, Sampdoria and Parma as his former clubs.
Ifeanyi Emmanuel