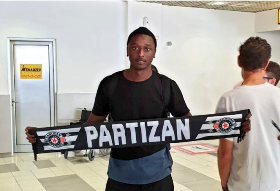 Serbian Super Liga side Partizan Belgrade have announced the signing of former Nigeria U23 international Umar Sadiq from AS Roma.
Sadiq has joined the eight-time league champions on a season-long loan and the agreement between Roma and Partizan Belgrade includes an option to buy the striker outright at the end of the 2019-2020 season.
The 2016 Rio Olympics bronze medalist arrived in Belgrade on Tuesday morning and has undergone a medical with the club.
So much was expected from Sadiq when he arrived at AS Roma from Spezia in 2015 but he has found it difficult breaking into the first team, making only six appearances in all competitions.
The 22-year-old is on his sixth loan spell as he was previously loaned out to Bologna, Torino, NAC Breda, Glasgow Rangers and Perugia.
Partizan Belgrade will face Beltinci FC, Olimpija, Bordeaux and Paks in pre-season games before their opening game in the Super Liga against Indija on July 19.
Igho Kingsley
Photo Credit : partizan.rs