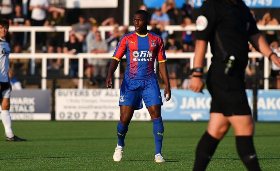 Allnigeriasoccer.com understands that English Premier League side Watford are on the verge of announcing the signing of promising Nigerian winger Joseph Hungbo.
The 19-year-old was the shock name in Crystal Palace's released list at the end of the 2018-2019 season.
Hungbo has been training with Watford U23 squad since the start of pre-season and he is in advanced talks to sign for the Hornets.
He was one of the best young players at Palace Academy, winning the club's Under 9-16 Player of the Year award in 2016 and captained the U18 squad.
A shoulder injury the winger suffered in a pre-season friendly against Kingstonian slowed his progress and he had to be loaned out to Margate for the second half of the 2018-2019 campaign to gain first-team experience.
Young stars Jayden Bennetts and Emmanuel Adebiyi as well as first-teamers Isaac Success and Stefano Okaka have been retained by Watford for the 2019-2020 season.
Ifeanyi Emmanuel
Photo Credit : cpfc.co.uk