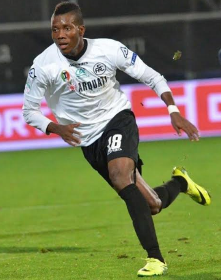 Allnigeriasoccer.com understands that Belgian First Division A side Club Brugge have won the race for Nigeria U23 international David Okereke.
Club Brugge have reached an agreement with Italian club Spezia over the transfer of the talented winger who was courted by a host of clubs in the English Premier League.
Southampton, Newcastle United, Wolverhampton Wanderers and Crystal Palace were monitoring the situation of Okereke with a view to a summer move but they have missed out on his services.
The 21-year-old will undergo a medical with Club Brugge on Monday, July 8 ahead of his unveiling by the Blue-Black.
He is highly thought of by Super Eagles boss Gernot Rohr who invited him to beef up the senior national team squad ahead of a friendly against Egypt in March after watching him in action for 12 minutes in an U23 AFCON qualifier against Libya.
Okereke was one of the outstanding performers in the Serie B last season, scoring 10 goals and providing 12 asssits in 30 appearances.
He is represented by renowned Italian agent Patrick Bastianelli, who used to handle the affairs of Odion Ighalo on behalf of Atta Aneke during his time with Udinese.
Ifeanyi Emmanuel