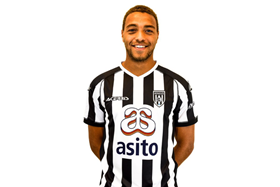 Dutch Eredivisie side Heracles Almelo have reached an agreement with FC Utrecht over the transfer of  Belgian-born Nigerian striker Cyriel Dessers.
The 24-year-old is committed to Heracles Almelo until June 2022 after putting pen to paper on a three-year contract.
Dessers departs FC Utrecht after two years and played 56 official games for the club, scoring 19 goals and setting up seven others.
Speaking to the official website after the transfer was confirmed, he said : ''I'm looking forward to playing and scoring here at Heracles Almelo. This is a great opportunity for me, it feels like a new adventure.

'' My style of football fits in with Heracles Almelo's philosophy of wanting to play offensive.

''I am happy to be here now and would like to show what I can do.

''In Belgium we would say that I have a lot of desire to start; I am really looking forward to it and am ready.''
Cyriel Dessers lists OH Leuven, Lokeren and NAC Breda among his former employers.
Igho Kingsley
Photo Credit : heracles.nl