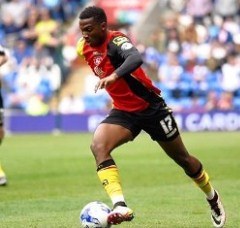 Allnigeriasoccer.com can exclusively report that Bulgarian giants CSKA Sofia are on the brink of announcing the signing of Nigerian winger Viv Solomon-Otabor.
The former Nigeria U23 invitee has arrived in Bulgaria to undergo a routine medical with CSKA Sofia ahead of his unveiling by the 31-time top flight champions.
Solomon-Otabor will put pen to paper on a three-year contract, keeping him at the capital outfit until the summer of 2022 if he passes his medical.
Birmingham City had offered the exciting winger a contract extension but he decided to move onto pastures new.
In addition, Portsmouth, where he spent the second half of last season on loan, were frustrated in their attempts to sign Solomon-Otabor on a permanent deal.
The 23-year-old also had loan spells at Oxford City, Bolton Wanderers and Blackpool during his time with Birmingham City and won the Blues Young Player of the Season award for 2015–16.
Ifeanyi Emmanuel