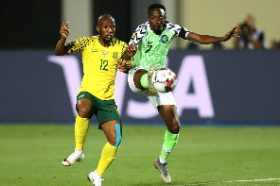 Speaking as a pundit on SuperSport, 1994 Africa Cup of Nations-winning midfielder Jay-Jay Okocha questioned the decision of Gernot Rohr to substitute Ahmed Musa in the 81st minute of Nigeria's 2-1 win over South Africa on Wednesday evening.
Ten minutes after Bongani Zungu netted Bafana Bafana's equaliser, Rohr turned to Moses Simon but Okocha was disappointed that Musa, who was a constant threat for the opposition defence, was the player substituted.
The former PSG star said : ''Ahmed Musa troubled the South African defence with his pace and I was a bit disappointed when he got substituted because he was causing all sorts of problems for this South Africa defence.

''But who are we to judge the coach, he made the right substitution at the end of the day because Simon came in and delivered that beautiful corner, and that's an assist for him.

''Overall we should start celebrating the win and stop criticizing.''
Of his ten career appearances at the Africa Cup of Nations, Musa has gone the distance in only four matches.
Ifeanyi Emmanuel
Photo Credit : cafonline.com