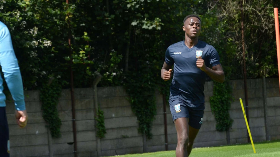 EFL Championship outfit Sheffield Wednesday have confirmed the signing of former Nigeria U23 invitee Moses Odubajo.
The official website of The Owls has not disclosed the financial terms and duration of contract signed by the versatile fullback.
Odubajo has reunited with Manchester United legend Steve Bruce who coached him at Hull City for a year.
As previously reported by allnigeriasoccer.com, Bruce made a personal phone call in his bid to persuade the defender to join the club and those talks were positive.
The 25-year-old's curriculum vitae boasts over 200 appearances in the English Football League with 16 goals to his name.
Having played for the youth team of Millwall, Odubajo joined Leyton Orient during the 2009-2010 season, before a permanent transfer to Brentford in 2014.
The right back enjoyed loan spells at St Albans City, Sutton United and Bishop's Stortford whilst at Leyton Orient.
Igho Kingsley
Photo Credit : swfc.co.uk