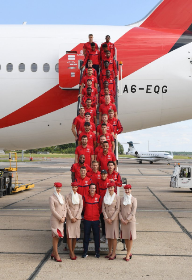 Young Nigerian midfielder James Olayinka has earned his first senior call-up to the Arsenal team after he was included in the traveling party to the United States by manager Unai Emery.
The Gunners have unveiled a list of twenty-nine players in the squad to America and it includes two players eligible to represent the Nigeria national teams, with winger Bukayo Saka also selected.
Olayinka, 18, was spotted training with Arsenal's first teamers this week, fueling speculation that he was in contention to be named on the roster.
Nigeria U23 international Kelechi Nwakali, goalkeeper Arthur Okonkwo, winger Xavier Amaechi and fit-again central defender Joseph Olowu who have all trained with the first team in the past are not part of the group.
Alex Iwobi has not made the traveling squad because of international commitments with Nigeria and it is all but confirmed that he'll miss pre-season training as the Super Eagles have qualified for the semifinals of the Africa Cup of Nations.
Arsenal will face Colorado Rapids in Denver on July 15, before International Champions Cup games against
Bayern Munich, Fiorentina and Real Madrid in  Los Angeles, Charlotte and Washington DC respectively.
Ifeanyi Emmanuel
Photo Credit : arsenal.com