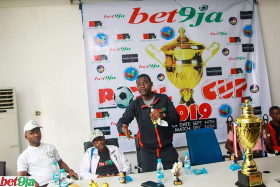 The dearth of grassroots talents has been identified as the bane of development in Nigeria football.


This was noted during the maiden press conference of the 2019 Bet9ja Royal Cup on Wednesday, July 10, 2019, at the DFA Patrick Okpomo Football House, Asaba.
Speaking at the ceremony, the chairman of the Local Organising Committee, LOC, and Head, Finance Sub Committee, Marvel Dick said the urgent need to revive the football game from the grassroots informed the idea to make competition a statewide tournament.

Mr Dick, a Bet9ja Super agent, stated the championship will kick off with qualification games from the local government level, adding that at least each of the 25 local government areas of the state will have a team qualified for the group stage of the competition, with some having two sides representing them to make up 32 teams for the group pairings.

While noting that the 13th edition of the competition has been registered with the Delta State Football Association, DFA, Mr Dick said talks are ongoing to involve members of the Delta State Referees' Council in the grassroot showpiece.

Also speaking, Eddie Iseri Ogbemudia of Myron Topclass Sport Outfits, Chief Consultant to the 2019 Bet9ja Royal Cup, said foreign scouts will be part of the competition to unearth raw talented players and set them on a proper career path professionally, adding that coaches and club officials, through organized refresher workshops, will be enlightened on how they could benefit from the transfer of players discovered by them to any foreign club.

Mr Ogbemudia noted that this has become necessary after some grassroot coaches having nurtured a player from the rudimentary stage to become a star with foreign club sides are left to struggle in abject poverty, pointing out that organisers of the Bet9ja Royal Cup this year are here to show them the business aspect of the game from the grassroots level.

In a goodwill message, Assistant Secretary General of the Delta State Football Association, DFA, Ochei Chimezie, assured members of the LOC and coaches of the support of the state FA.

Since its inception, nine different teams have won the Royal Cup crown, with Zumax FC winning it the most with three titles.

Registration for the 2019 Bet9ja Royal Cup is on currently at various Bet9ja agent shops across the state.

The qualifying matches for the competition, proudly powered by Bet9ja agents in Delta State, will begin on September 14, with the grand finale taking place on December 14, 2019 in Asaba.