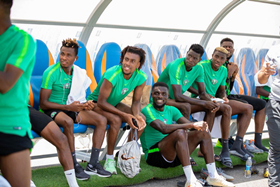 Less than twenty-four hours after their 2-1 win against South Africa, the Super Eagles returned to the training pitch on Thursday, allnigeriasoccer.com reports.
The players participated in jogging and aerobic exercises before they were split into two groups.

The substitutes not involved in yesterday's game did more of the kickabout while the three goalkeepers Daniel Akpeyi, Ikechukwu Ezenwa and Francis Uzoho were extensively drilled by the goalkeeper trainers.

Ahmed Musa, Odion Ighalo and Chidozie Awaziem suffered knocks in the quarterfinal clash against Bafana Bafana, and the trio sat out the recovery session but were all present at the training ground.

The Super Eagles number 9 is not in danger of missing the semifinal match against either Ivory Coast or Algeria on Sunday, July 14.

Bursaspor defender Abdullahi Shehu did not train fully and was attended to by the physiotherapist who applied an ice pack on his thigh.

It appears John Obi Mikel's injury problems are fully behind him as he took part in all the physical exercises.

The new Trabzonspor signing sustained a knee injury in the Super Eagles final group game against Madagascar on June 30 and was a non-playing substitute against South Africa.