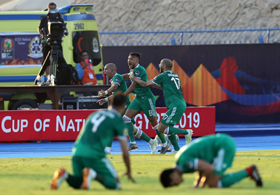 Algeria have progressed to the semifinals of the Africa Cup of Nations after beating Ivory Coast on penalties and will be facing three-time African champions Nigeria in Cairo on Sunday, July 14.
Desert Foxes manager Djamel Belmadi could be without two of his key players when they play the Super Eagles.
Sofiane Feghouli and Youcef Atal had to be substituted against the Elephants after they suffered injuries; the OGC Nice fullback is all but ruled out of the tournament while the Galatasaray star is racing against the clock to be fit.
Speaking in the mixed zone after the quarterfinal match vs Ivory Coast, Feghouli was quoted as saying by Le Buteur : ''I do not know exactly the seriousness of my injury. But I will see with the national team doctor.
''Even though I will not be fit to play Nigeria, Algeria will have another warrior to play in this match.''
The Super Eagles beat Algeria 3-1 in the 2018 World Cup qualifiers in Uyo and were held to a 1-1 draw in the return leg but the result was overturned and the North Africans awarded a 3-0 win after FIFA punished Nigeria for fielding an ineligible player, Abdullahi Shehu.
Igho Kingsley
Photo Credit : cafonline.com