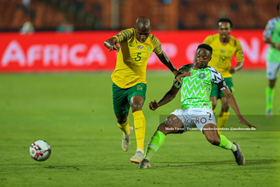 Super Eagles coach Gernot had predicted a semifinal meeting with Algeria even before a ball was kicked this evening at the Suez Stadium, Suez and reckons that the 1990 champions are the best team in the tournament.
The German football tactician was relieved that all his players came out unscathed in their 2-1 win against South Africa ahead of the semifinal match with Algeria.
One of the topics hotly debated after the victory over South Africa was Rohr's decision to substitute Ahmed Musa with ten minutes remaining and the former Bayern Munich defender explained post-match that the winger was walking a disciplinary tightrope.
''At first we have to recover well because it was not easy, we avoided extra time. We don't have any injuries, I substituted Musa because he had a yellow card,'' Rohr stated on Wednesday evening.

''No suspension, no injury. We have to watch the game of Algeria tomorrow (today), for the moment they are perhaps the best team in the tournament, so it will be a very big challenge to beat Algeria.''
Musa suffered a knock against Bafana Bafana and did not take part in the Super Eagles recovery session on Thursday morning.
Ifeanyi Emmanuel