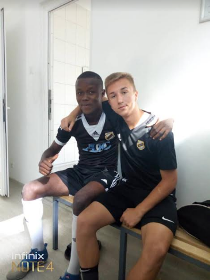 The first edition of Football For Hope scouting programme put together by Right2Win Football Academy in conjunction with SKE Football Club has yielded a positive result and has also fulfilled the aims of the programme.

This is as a result of the success recorded by Right2Win Academy in collaboration with SKE football club, as their player, Musibau Kolawole Shamsudeen became the first product of the Academy to benefit from the scheme and travel abroad.

The player departed the shores of the country on June 29, 2019 for Fudbalski Cukaricki, Serbia, a top division club in Serbia.

He will be with the club for trials till contract talks are finalised with his parent club.

Speaking on the development NFF licensed Intermediary and representative of Right2Win Football Academy Mr. Eddie Iseri Ogbemudia of Myron Topclass Sport Outfits said "I must commend the president of Right2Win Sports Academy Engr. Kelechi Nnorom, I know how much of his resources he invested in the program and also to see that Kolawole got the best treatment leading to his trip to Belgrade"


"We are wishing the player all the best, having done our part it's left for the him to prove to his would be employer what he is made of, certainly Engr. Kelechi is not keen on what comes to Right2Win but more concerned about the development of the player."
''According to the President Engr. Kelechi Nnorom several players will be departing the country this summer so secure professional contracts in Europe." Mr. Ogbemudia concluded.
Bayo Adegboyega