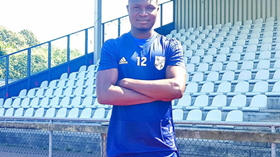 Sodiq Rasheed has completed the formalities of his permanent switch to Danish 1st Division outfit Fremad Amager.
Last season, the central defender was playing at the second-tier club on loan from Nigerian club Remo Stars.
''I am thrilled to have entered into an agreement with Fremad Amager. After a year's loan agreement, I have been working to exchange my loan for a permanent contract at the club, '' Rasheed said in a press release.
He continued : ''Now I can focus on developing in some areas and doing everything I can to get more playing time. I came back to the club a few days ago, but luckily I know the conditions, the coaches and the players.
''Now it's about hard work to prove the club that they have chosen the right decision. ''
The 19-year-old Rasheed was named in the match day squad on 14 occasions last season and made two appearances off the bench, logging 20 minutes.
Igho Kingsley
Photo Credit : fremad-amager-statistik.dk