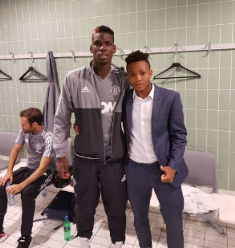 Allnigeriasoccer.com can exclusively report that Dutch Eredivisie side SC Heerenveen and Valerenga have reached an agreement for the transfer of highly-rated Nigerian winger Chidera Ejike.
Ejike will undergo a medical at SC Heerenveen as from Monday, July 15 ahead of his unveiling.
Although a club-to-club agreement has been reached, there are still a few details to be sorted out between Heerenveen and Ejike which has to do with the length of contract.
Having said that, the Gee-Lec Football Academy product is expected to put pen to paper on at least a four-year deal.
Dubbed the Nigerian Iniesta back in his homeland, the 21-year-old trialed at Liverpool and was courted by Premier League champions Manchester City prior to his move to Valerenga in March 2017.
Regarded as one of the brightest prospects in Norwegian football, he has scored 15 goals in 69 appearances across all competitions for Valerenga.
Ifeanyi Emmanuel