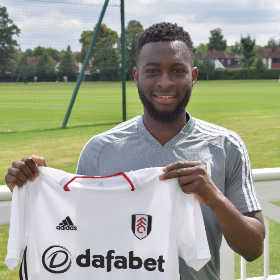 Through a statement on their official website Championship side Fulham have announced the capture of Chelsea Academy product Martell Taylor-Crossdale.
The prolific striker has joined the Cottagers on a two-year deal following the expiry of his contract with the Europa League winners.
London-born Taylor-Crossdale was the top scorer in the U18 Premier League in the 2016-2017 season and was part of the England squad that won the Toulon Tournament Trophy in 2017.
''I'm ready to go here and show everyone what I can do. I felt coming here presented the perfect opportunity to push into the first team,'' Taylor-Crossdale told Fulham's official website.
''I had a look at the pathway into the first team and I'm hopeful I can breakthrough to impress the manager.

"I'm a player who likes to run in-behind. I'm good in the box and know where the net is, I hope I can score lots of goals for Fulham."
The 19-year-old will initially link up with Mark Pembridge and Colin Omogbehin in Fulham's U23 squad .
Igho Kingsley
Photo Credit : fulhamfc.com