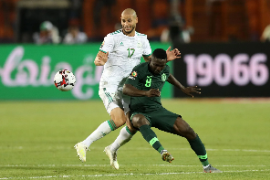 Izuchukwu Okosi reflects on the performances of the Super Eagles players in the semifinals defeat to Algeria.


The Starters
Goalkeeper
Daniel Akpeyi : Seems to lack confidence as always and had no answer to Riyad Mahrez's world class free kick. 4.5/10.
Defenders
Chidozie Awaziem : What a performance by Awaziem unfortunately he will miss the third place final against Tunisia due to a yellow card received towards the end of the match. 7/10.

Jamilu Collins: The left back was not overly fazed by the personality of Riyad Mahrez - even made a vital clearance in the first half to deny Baghdad Bounedjah. 6/10.

Kenneth Omeruo : Had a strong performance coming to the rescue of some of his teammates although had some nervous moments. 7/10.


William Troost Ekong : Conceded an own goal and struggled throughout the game. 4.5/10.
Midfielders
Wilfred Ndidi : The defensive midfielder was having a good game but sadly gave away a free kick which Riyad Mahrez scored from just before the end of the match. 5.5/10.


Alex Iwobi : The Arsenal forward created scoring chances but his weak shots were never going to trouble goalkeeper Rais M'Bolha. 6/10.
Strikers
Ahmed Musa : The captain was not so adventurous as we saw against South Africa as he had to help Collins defend against Mahrez and Youcef Belaili. 6/10.

Samuel Chukwueze : The Villarreal winger was not as effective as he was against South Africa. Was subbed off in the second half. 5.5/10.

Odion Ighalo : The striker scored from the penalty spot. The Algerians never gave him a clear chance to punish them. 6.5/10.

Henry Onyekuru : Made his AFCON debut but the 13 minutes spell he had proved not to be enough to influence the outcome. He did fire a shot that was off target. 4/10.
Izuchukwu Okosi
Photo Credit : cafonline.com