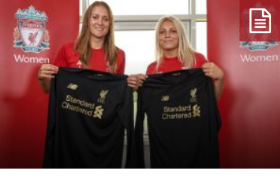 Liverpool have informed via their official website that goalkeepers Anke Preuss and Fran Kitching have inked new contracts with the club's women's team.
Preuss has been offered a new contract by Liverpool having impressed in her first season with the club in which she made 17 appearances.
The 26-year-old lists FCR 2001 Duisburg, TSG 1899 Hoffenheim, 1. FFC Frankfurt, AGSM Verona Calcio and Sunderland as her previous clubs.
She was a member of the German side that reached the final of the 2012 FIFA U20 Women's World Cup.
Kitching, 21, joined Liverpool in 2018 after spells at Chelsea, Watford and Sheffield United.
She has represented England at U20 level and made 10 appearances for Liverpool last term.
Igho Kingsley
Photo Credit : liverpoolfc.com