...the complete Nigerian football portal
Subscribe
Nigerian Transfers You Might Have Missed During The AFCON Including Five Super Eagles Stars
Published: July 20, 2019 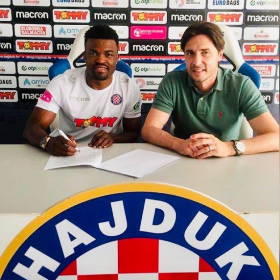 Following the conclusion of the 2019 Africa Cup of Nations, allnigeriasoccer.com brings you transfers involving Nigerian players that you might have missed as a result of the tournament in Egypt.
Super Eagles striker Emem Eduok has completed his move to Croatian side HNK Hajduk Split. He has inked a three-year deal and will play with the number 11 jersey in the 2019-2020 season.
Dream Team VII captain Azubuike Okechukwu and out-of-favor Super Eagles midfielder Raheem Lawal have joined Turkish clubs Basaksehir and Karagumruk respectively, penning one-year deals.
Former Real Salt Lake midfielder Sunday Stephen has ended his search for a new club after inking a contract with Cypriot First Division club Pafos FC. He was unveiled with the number 6 kit.
The fifth Super Eagles player to change clubs is Chukwuma Akabueze who has transferred to Turkish First League club Umraniyespor as a free agent.
EFL League Two side Grimsby Town have snapped up Moses Ogbu on a one-year contract. He previously played for IK Sirius and Jonkopings Sodra in Sweden, and was in the  United Arab Emirates with Al-Ain last term.
Abiola Dauda and Alhaji Gero have joined AE Larisa (Greece) and Helsingborg (Sweden) on free transfers.
While Dauda has a contract with the Super League side until June 30, 2022, Gero's deal runs out at the end of the 2021 season.
Ex-Flying Eagles invitee Freddie Ladapo has left relegated Plymouth Argyle for Rotherham United. The striker's contract is for three seasons.
Ifeanyi Emmanuel