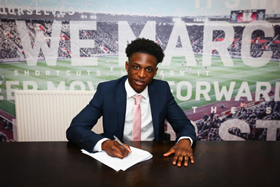 Nigerian defender Zuriel Otseh-Taiwo is among Southampton's new intake of Academy scholars, The Saints have confirmed via their official website.
The budding star has put pen to paper on a two-year scholarship with the Premier League side and is in contention to make his debut in the U18 Premier League in the upcoming season.
Taiwo has been on the books of Southampton since the age of eleven, progressing through the ranks before his recent promotion to the U18 squad.
A right-back by trade, he represented Southampton at the prestigious Super Cup NI a year ago and is a product of Applemore College.
The promising defender will be hoping to follow in the footsteps of his cousin, Liverpool winger Sheyi Ojo who is currently on loan at Rangers, by making his debut in the Premier League as a teenager.
Two players with Nigerian background Oludare Olufunwa and Nathan Tella have also signed new deals with Southampton ahead of the new season while the highly-rated Republic of Ireland U19 striker Jonathan Afolabi is moving onto pastures new.
Ifeanyi Emmanuel
Photo Credit : southamptonfc.com