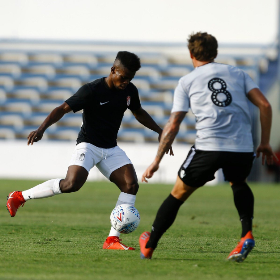 A round up of the Nigeria-eligible players who found the net for their respective clubs in pre-season matches that took place on Saturday.
Tottenham Hotspur loanee Luke Amos scored both goals for Queens Park Rangers as they secured their first pre-season win, beating Oxford United 2-1.
The central midfielder headed home Ebere Eze's cross at the far post to give QPR the lead in the 31st minute and doubled their advantage two minutes later with another header.
Elsewhere, Ramon Azeez netted the game winning goal for Granada as they claimed a 1-0 win over Championship outfit Reading in Marbella.
The former Flying Eagles skipper played the full game for the newly promoted La Liga side.
Chuks Aneke's Charlton Athletic were beaten 3-1 by Gillingham at Priestfield Stadium with the former Arsenal striker on target.
The 26-year-old fired home a rebound two minutes before half-time and was replaced in the 54th minute after suffering a hamstring injury.
Finally, Wycombe Wanderers played out an entertaining 2-2 draw with Brentford at Adams Park, with evergreen striker Adebayo Akinfenwa among the scorers.
The physical attacker made it 2-0 on 28 minutes when his bullet header beat goalkeeper Daniels.
Igho Kingsley
Photo Credit : granadacf.es