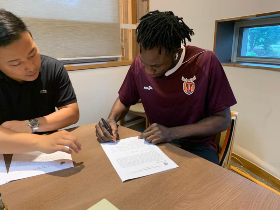 Allnigeriasoccer.com has been informed that Nigeria international Osaguona Ighodaro has joined South Korean K League 1 club Jeju United.
The 28-year-old will remain on the books of Jeju United until at least 2020, having put pen to paper on a one-year contract with the club.
Ighodaro last played for Iran's Persian Gulf Pro League side Zob Ahan SC, whom he represented in the qualifying rounds of the AFC Champions League last season.
On his curriculum vitae, he has also turned out for Raja Casablanca, KV Mechelen, Westerlo, Umm Salal, Les Buffles FC du Borgou as well as Enugu Rangers and Shooting Stars in his homeland.
The striker has been in the international wilderness since his appearance against Sudan in an Africa Cup of Nations qualifier in October 2014.
Jeju United are placed tenth on the K League 1 table after 22 games and face Jeonbuk Motors in their next fixture on July 31.
Ifeanyi Emmanuel