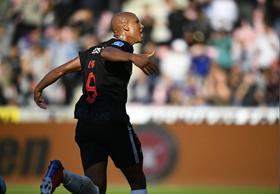 Catch up on the Nigerian players that were on target for their respective European clubs in league matches that took place on Sunday, July 21.
We begin at the MCH Arena in Herning where FC Midtjylland recorded a 2-1 win over Nordsjælland. The Wolves grabbed all three points thanks to Ayo Okosun's game winner in the 56th minute.
Okosun gave the home team a 2-1 lead with a well-placed shot from just outside the box. The 25-year-old is eligible to represent the national teams of Nigeria, Denmark and Germany.
Young midfielder Frank Onyeka went the distance for Midtjylland while Okosun played for 73 minutes.
Remaining in Scandinavia, Flying Eagles star Akor Adams opened his account for the season in style, scoring two goals for Sogndal in their 5-2 hammering of Tromsdalen on game week 14 in the Norwegian First Division.
The teenage striker struck in the 31st minute to make it 3-1 and added gloss to the scoreline in the 61st minute, Sogndal's fifth goal.
Adams was involved in the first two matches played by the Nigeria U20s in the 2019 FIFA U20 World Cup and was an unused substitute in the last two, against Ukraine and Senegal.
Igho Kingsley
Photo Credit : fcm.dk
Latest News