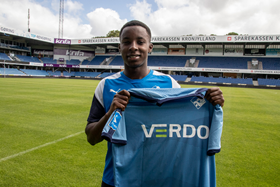 Former Nigeria U23 invitee Tosin Kehinde could make his professional debut very soon, allnigeriasoccer.com reports.
The attacking midfielder joined Danish Super Liga side Randers on a season-long loan earlier this month, and manager Thomas Thomasberg has given an indication that he's part of his plans after naming him on the roster for the first two matches of the new season.
Kehinde was a non-playing substitute against SönderjyskE (July 14) and Brondby (July 21)
The 21-year-old departed Manchester United in the summer of 2018 as he feared he may not play for the first team, but his situation did not change when he joined CD Feirense as he ended up playing for their U23 team last season.
Signed to bolster Randers attack, Kehinde is competing with Hammershøj-Mistrati, Kallesøe and Marvin Egho for one of the spots in the starting line-up.
Ahead of a potential debut in the coming weeks, he could feature for Randers reserve team when they tackle
Brabrand on Monday afternoon.
Ifeanyi Emmanuel
Photo Credit : randersfc.dk
Latest News