Subscribe
Peter Eneji Rubs Salt In The Wound Of AS Trencin As GBS Terminates Partnership With Ex-Slovak Champions
Published: July 22, 2019 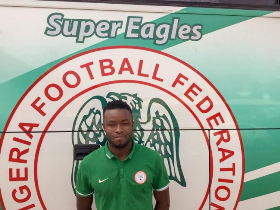 GBS Academy has started a new partnership with FK Senica after a fallout with AS Trencin.


Allnigeriasoccer.com understands that AS Trencin defaulted on payments that were due to GBS Academy which led to GBS immediately cancelling the transfers of two big talents in Tenton Yenne and Peter Eneji who were both on the verge of joining AS Trencin and had almost completed their transfers.
GBS has already initiated court proceedings against AS Trencin.
FK Senica president Ton Cannen who had connections to Tony Harris had successful meetings with him in the Netherlands and a cooperation has been agreed with Eneji and Tenton being the first set of players to join FK Senica while other young talents are expected to also join the Slovakian side soon.

This will come as a big blow for AS Trencin who had successfully cooperated with GBS over several years to land top talents like Kalu Samuel (Bordeaux), Moses Simon (Levante) and Hilary Gong (Vitesse), while Rabiu Ibrahim, Philip Azango and Reuben Yem also all completed transfers to Belgium club KAA Gent from AS Trencin

To rub salt into the wound, debutants Peter Eneji will go on to score two goals against Trencin in their first league match of the season with Tenton Yenne also providing two assists which helped to bring down the former lively side that just managed to survive relegation last season through a relegation playoff following the team's poor run of results.


A representative of GBS Mr Kobi told this website Mr Caanen and Mr Harris had a successful meeting.
''I believe it is the start of a good cooperation. Senica is a very good professional and ambitious side with good modern training facilities, our talents will now be going to FK Senica,'' Kobi stated.
GBS is one of the top ranked and most consistent academies in Africa and is responsible for producing the finest pacy wingers and talents in the continent e.g Ahmed Musa, Moses Simon, Samuel Kalu et al.
In 2017 the Minister of Youth and Sports Solomon Dalung personally visited the academy to observe the pool of talents in the academy after hearing so much about the academy’s U15 team renowned to be the best in Nigeria.
Ifeanyi Emmanuel