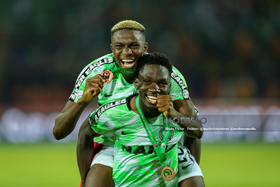 After helping the Super Eagles clinch a bronze medal at the just concluded AFCON tournament in Egypt, Chelsea centre-back Kenneth Omeruo has shifted focus to his club career.

The 26-year-old doesn't seem to have a future at Stamford Bridge as he's yet to register a single appearance for the senior team and wants to move onto pastures new in the summer transfer window.

He was left out of Lampard's pre-season squad due to his active involvement in international duties in Egypt, which will have a negative influence on his chances of breaking into the new manager's team ahead of next season.

Considering his inability to make his official first-team debut for the Blues after seven years of being with the Stamford Bridge outfit, Omeruo will definitely decide whether to remain in London or move elsewhere.

However, his final decision could be influenced by two major factors, which are game time and contract offers from interested suitors.

Omeruo has never hidden his desire for regular action and he might consider leaving the Blues if  regular game-time isn't guaranteed next campaign.

Should he fail to get an assurance from Lampard regarding his playing time in the coming season, it won't be a surprise if Omeruo decides to put an end to his seven-year unfruitful ties with the blues.

The financial value of contracts offered by interest suitors will also go a long way to determine if the strong defender will stay with the Blues beyond this summer.

Omeruo spent last season on loan at CD Leganes where he enjoyed a massive improvement in his performances, thanks to Mauricio Pellegrino's trust in his ability.