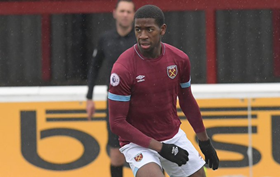 Though he might not be getting much attention from the media like Arsenal youngster Bukayo Saka or Chelsea starlet Faustino Anjorin, West Ham youngster Ajibola Alese is having a great time with West Ham U23s.

Steve Potts' men ended their one-week pre-season camp in Slovakia with an impressive 3-1 victory over FC Humenne on Saturday and the 18-year-old defender was involved in the encounter from start to finish as he put in a fine shift.

The Irons are expected to return to England for the second lap of their pre-season friendly matches ahead of their 2019-20 Premier League 2 opening fixture.

The Nigeria-eligible defender will hope to get more game time in the upcoming friendly match against National League Side Dagenham & Redbridge which will take place on the 26th of July at Chigwell Construction Stadium.

Nigeria Football Federation must keep a close eye on the England U18 international because he is one of the quality defenders capable of stepping into Leon Balogun's shoes whenever the 31-year-old puts an end to his international career.