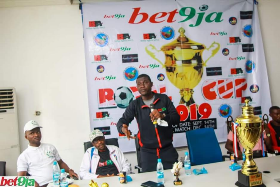 Organisers of the 2019 Bet9ja Royal Cup have congratulated officials and players of Warri Wolves FC, on their promotional 5 - 3 penalty triumph over Dynamite Force FC of Iyamho in the Nigeria National League playoff to secure a safe return to the Nigeria Professional Football League on Monday at the Nnamdi Azikwe Stadium, Enugu.

According to a press statement released by the competition's Media Officer, Jahrock Ujewe, the organisers of the 2019 Bet9ja Royal Cup say the return of Warri Wolves to top flight football in Nigeria would set the platform for more young players to be discovered from the grassroots in Delta State, as the Oil City club would traditionally look inward to unearth raw talents the way Super Eagles' midfielder, Oghenekaro Etebo, and others were spotted by the Seasiders few years before its ill-fated relegation in the 2015/2016 season.

The statement praises the club's management for securing promotion, even in the face of seemingly insurmountable odds, saying that history would not forget them.

However, it charges the club not to rest on its laurels, but to brace up for life in the elite division of football in Nigeria.

Registration for the grassroots soccer showpiece is still on at the moment and any interested team can get their registration form at the nearest Bet9ja agent's shop in Delta State, and thereafter, make payment into its Zenith Bank account, with account number: 1016470678 and account name: Bet9ja Agents MPCS.

The 2019 Bet9ja Royal Cup will formally begin on September 14, 2019, with qualifying matches across Delta State.