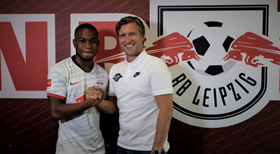 RB Leipzig on Thursday, July 25.
The very reliable BBC is reporting that Lookman has inked a five-year contract and Everton will pocket £22.5 million, and if that is the case the transfer has broken a Nigerian transfer record previously held by current Super Eagles captain Ahmed Musa.
In the summer of 2016, Leicester City coughed up a fee in the region of £16.6 million to bring Musa to the King Power Stadium - record transfer for a Nigerian winger.
Before Musa broke the record, the most expensive Nigerian winger in history was Victor Moses who joined Chelsea in 2012 for a fee of nine million pounds.
Lookman is now the second costliest Nigerian player behind Kelechi Iheanacho who moved to Leicester City from Manchester City for £25 million.
Everton paid £11m to Charlton Athletic for the services of the 21-year-old in January 2017.
Ifeanyi Emmanuel
Photo Credit :  dierotenbullen.com