...the complete Nigerian football portal
Subscribe
FIFA Rankings : Nigeria Move Up To 33rd After Playing The Most Matches By A Country
Published: July 25, 2019 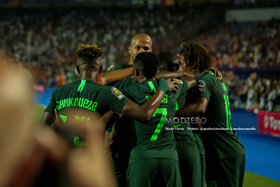 Football governing body, Fifa, on Thursday, July 25 published its latest rankings of National Teams.
Compared to their position in the last rankings, the Super Eagles have climbed 12 positions and are now rated 33rd in the world, while they are the third best team Africa.
All the four countries that reached the semifinals of the recently concluded Africa Cup of Nations are among Africa's top five teams, with Senegal the top ranked team followed by Tunisia, Nigeria, Algeria and Morocco.
Of the 211 countries ranked, Nigeria, Algeria and Senegal played the most matches, eight in total.
Our three rivals in the 2021 Africa Cup of Nations qualifiers in the shape of Benin, Sierra Leone and Lesotho sit in the 82nd, 114th and 144th positions respectively.
Belgium top the rankings, with South American champions Brazil, world champions France, England and Uruguay completing the best five teams in the world.

The next FIFA/Coca-Cola World Ranking will be published on September 19, 2019.
Igho Kingsley