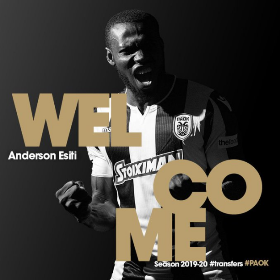 Greek champions PAOK have announced the acquisition of Nigeria international Anderson Esiti from Belgian club KAA Gent.
The Nigerian midfielder has penned a four-year deal until the summer of 2023 and has been allocated the number 24 jersey for the upcoming season.
PAOK confessed that they attempted to sign Esiti in the January transfer window but were unsuccessful.
In three seasons at Gent, the combative midfielder played 95 matches in all competitions, was yellow carded 26 times and dismissed on four occasions.
He started his career at Bobby United before switching to Leixoes followed by spells at Estoril and Gent.
Anderson Esiti links up with former Arsenal striker Chuba Akpom at PAOK.
Igho Kingsley
Photo Credit : paokfc.gr