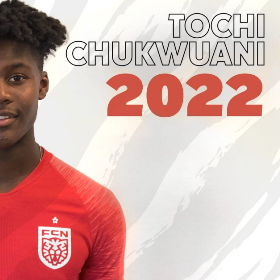 FC Nordsjælland have announced that Tochi Chukwuani has penned a contract extension with the Danish Superliga club.
The new contract will keep the promising central midfielder at FC Nordsjælland until at least 2022, meaning he is under contract for the next three years.
FIFA regulations on the status and transfers of players state that players under the age of 18 may not sign a contract for a term longer than three years.
The 16-year-old Chukwuani has not made his professional debut for FC Nordsjælland but has made appearances in the U19 Boys League and Reserveligaen.
He was born and raised in Denmark to Nigerian parents and has a Danish passport.
Chukwuani is regarded as one of the top young prospects in Danish football and has played competitive matches for Denmark's U17 national team.
Ifeanyi Emmanuel
Latest News