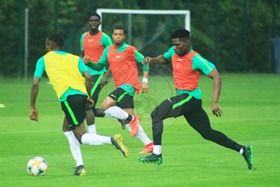 New Watford signing Tom Dele-Bashiru has explained why he committed his international future to Nigeria over his country of birth, England.
The 19-year-old was the poster boy of the Flying Eagles squad to the 2019 FIFA U20 World Cup and became provisionally cap-tied to the African giants after making his competitive debut in the 4-0 rout of Qatar.
Tom Dele-Bashiru, who had previously represented England at U16 level, confessed that it was going to be difficult for him to break into the Three Lions squad but stressed that he does not regret his decision to play for Nigeria.
Speaking to the official website of the Hornets, Dele-Bashiru stated : ''I just felt like I'll probably play first team with the Super Eagles, more likely than playing for England because England have a lot of players to choose from.

''Obviously it is my home nation so it was good to play for them.

''I am very proud of my roots, I try and embrace it. I paint a good picture so that people understand what it is to be a Nigerian''.
Ladi Salami is the agent of both Manchester-born Dele-Bashiru and Super Eagles striker Isaac Success, and it is believed the midfielder chose to join Watford ahead of other clubs interested in his signature because his representative has a good relationship with the Vicarage Stadium outfit.
Ifeanyi Emmanuel
Photo Credit : thenff.com